“I hope that you will always remember your story, and that you will carry your story with you as proudly as I carry mine.” First Lady Michele Obama told a graduating class of 100 students, giving the commencement address to Santa Fe Indian School. 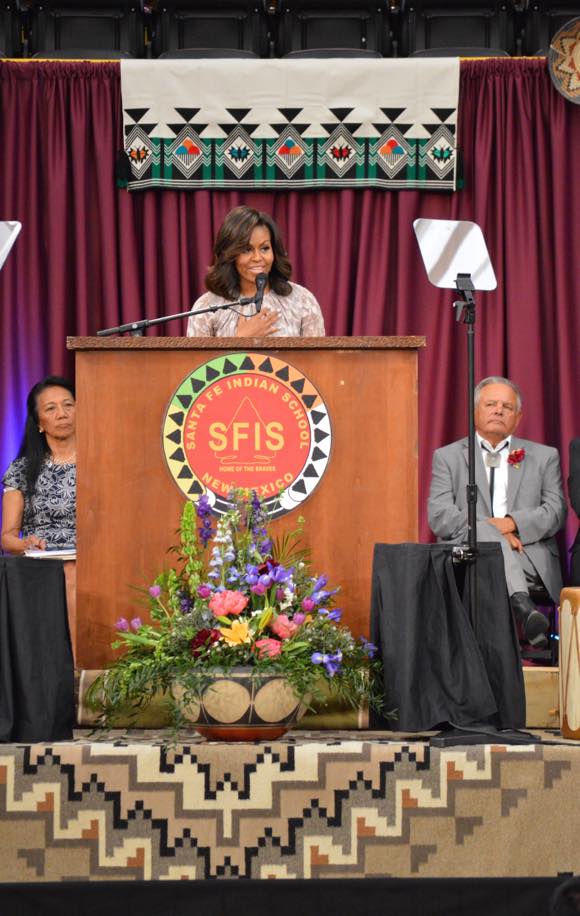 She personalized the history of the African American experience, and shared her family’s roots in 19th century American chattel slavery. Her remarks seemed geared toward moving beyond a sense of connection between her and the audience, which was already palpable in the hall, to something deeper, something more akin to identification.

I am the great-great-granddaughter of Jim Robinson, who was born in South Carolina, lived as a slave and is likely buried in an unmarked grave on the plantation where he worked.

I am the great-granddaughter of Fraser Robinson, an illiterate houseboy who taught himself to read and became an entrepreneur—selling newspapers and shoes.

She spoke of values, claiming the shared values of respect, perseverance and integrity, three of the ten core values of the Santa Fe Indian School. She remarked on the hopeful, positive trajectory of the school and the accomplishments of its students.

Our story is about who we are. When we talk about our experiences, what we see, feel, do, fear, like with our own words, we create our own life.

Don’t try to be the next so and so. Be the first you. Remember your story, carry your story, and tell your story.

Your story makes you you.